Even after publishing 18 books and over 60 feature articles in national magazines, when people ask me what I do for a living, I feel very self-conscious telling them that I am a writer.To be frank, writing is very, very hard for me, even with simple things like an e-mail. The stark differences between Chinese and English grammar make it difficult to remember all the rules. To make things worse, I was taught to memorize individual words when learning English, a cumbersome method that limits my ability to spell correctly. I didn’t hear about phonetic spelling until my son was in grade school.

That is why I write most of my emails in a telegram style. I would much rather put the time it would take to write a long e-mail into writing my books. I get a perverse sense of joy when I catch mistakes in the e-mails I receive, as they assure me that nobody is perfect. So if you ever need to communicate with me, there is no need to double check your spelling or grammar. Your little errors just might make my day.
Sometimes I wonder if I have chosen the right career, but I can’t think of anything I would rather do than write (except play badminton). There are many days when I wish I were more adept linguistically. If only I could be like one of my friends who can write and speak six languages fluently.

After Revolution received numerous awards and much praise, people often asked me how I developed my spare, lyrical style. My answer: since I have to put an enormous effort into anything I write, I try to make every word count.

I used to envy writers with large vocabularies who would write thousands of words a day and bang out emails at lightning speed. Now I envy the people texting on their iPhones in restaurants, at the airport or in line at the grocery store. I can’t do that either. I wonder if iPhones have a good built-in spell checker. I haven’t yet learned to text. My excuse: living in the moment!

Up to this point in my writing career, I have written historical fiction, picture books, adult cookbooks, magazine features and now ghost stories. I’ve found that some forms are more challenging than others, but each one has given me more confidence as a writer and reinforced my belief: write what’s in your heart. When a writer has an interesting story to tell, it doesn’t matter which genre they use to deliver it. I believe all forms of writing interweave with each other.

Due to the political unrest of the Cultural Revolution that left the nation starving, I grew up obsessed with food. It seems only natural that my fixation is now a central theme of my writing. In A Banquet for Hungry Ghosts, food becomes a murder weapon, an object of contention between the living and the dead, or a demonstration of a ghost’s power over the living. Readers who are hungry for more relevant facts can enjoy a serving from the historical notes, and for those whose appetites have been stirred, there is a delicious recipe at the end of each story.
​
To me, writing is not only a necessity, it’s also therapeutic. It’s the best way I know of to keep China, the country that I love so deeply, close to my heart. Perhaps because that love is so strong and unwavering, I have never truly experienced an extended period of writer’s block. When I do have trouble writing, I go to my kitchen and cook one of the recipes I favored during my childhood, like the dumplings featured in Banquet. I hope it brings you inspiration! 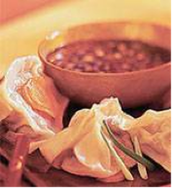 To avoid coating the steamer basket with oil, and to keep the dumplings from sticking, place each dumpling on its own thin disk cut from a large, round carrot. When the dumplings come out of the steamer, each has its own small serving tray. As a bonus, you get to enjoy the sweet and tender carrots. For meat dumplings, you can substitute the shrimp with the same amount of ground beef or pork.